The Word assignment‘s image caught my eye as a visual depiction of “magic”.  The individual letters told a story in addition to the overarching word itself.  The assignment essentially gets the creator to start exploring the visuals that are evoked when we think of certain words.  For my creation, I attempted to visually depict the word “Ancient”.  I picked a font in Paint that had some distortion and areas that were deliberately incompletely filled (AR Darling).  This would ideally evoke older texts and aging materials.  I then started typing the word as I would in a normal word processor, and then began to “sink” the latter letters.  My hope was to create an effect where it looks like as the letters progress, the word begins to sag under the weight of time. 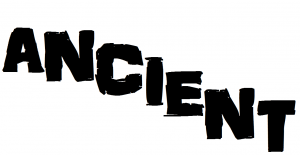