I was inspired by this post to complete the tapestry assignment.  This is essentially an exercise in minimalism, as historically these tapestries had to tell narratives in a somewhat simplistic fashion (after all, these tapestries had to be hand-sewn).  I ultimately chose to try to convey the overarching story of Xena: Warrior Princess through tapestry design.  Xena is the armored figure upon a horse (who somewhat resembles Argo, her steed throughout the series).  Behind her lies the death and destruction of her past (when she was a Grecian warlord).  The standing figure represents Hercules, who put her on her redemptive path, symbolized by the the central sunbeams.  Next to Xena are her fallen weapons, referencing the pilot episode of the series where Xena buries her weapons in a bid to escape her past.  Ahead of her lies Amphipolis and Potidaea, where she will meet Gabrielle (represented by the golden woman) who will be central to cementing Xena’s path to redemption.  Underneath these visuals is a modified quote from Julius Caesar (one of Xena’s main nemeses).  This quote hints at the larger themes of the series, indicating that this redemptive path is part of Xena’s destiny.  The first part of the statement also highlights Xena’s strengths in this context.  The final product is below, and hopefully conveys these themes effectively. 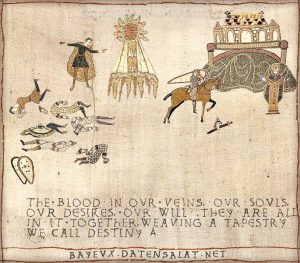