The image of Jim Groom on a Wanted poster naturally caught my eye as I was searching through visual assignments.  This interest was only magnified by reading the description.  Essentially I could pick a favorite character and try to describe her as a villain.  I immediately jumped to the idea of using Xena.  While clearly a heroic figure, she has a redemptive storyline with a dark past.  It would be easy to see how society at large might be skeptical of her redemption.  After all, her past crimes included piracy, pillaging, and murder, and she was once known as “The Destroyer of Nations”.  So this was a fun way to essentially highlight this character’s ex-warlord days visually.

I chose to use the poster generator suggested by the assignment, which was relatively easy to use.  I first had to select a picture of Xena to use, so I conducted a quick Google Search and found this one.  I then used paint to crop out some of the extraneous background, and uploaded the final product to the site.  One of the only difficulties I ran into came while filling out the lines for the text of the poster, which had character limits.  This forced me to be as concise as possible while describing the many atrocities Xena committed in her past.  Ultimately I chose to generalize them as “crimes against the state” I also opted to use dinars (the currency used in the show) as opposed to dollars while issuing the reward.  I then generated the image successfully! 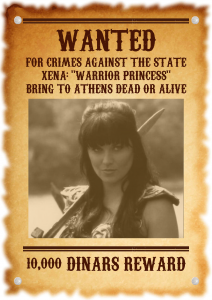