Our tear-down product was a 2013 Nintendo 2DS.  The process required some finagling, as one of the screws was stripped, but we were eventually able to open the device and begin examining individual components. 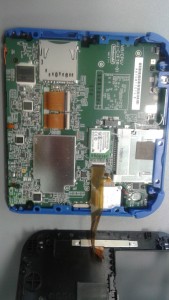 The research process was very interesting.  I actually couldn’t gain much information from my particular assigned components (a lithium ion battery and the 3D camera).  The camera had only one serial number, and internet searches yielded no results (other than replacement information).  The lithium ion battery was produced in China, which is not known for being particularly transparent, and much of the information was written in Japanese.  However, I began researching the CPU, RAM and GPU, and those yielded much better results.  Internet searches took me to various articles that allowed me to identify production companies, and I was able to find websites for each of these companies (the ones based in Japan were the most difficult).  This allowed me to locate the street locations of their headquarters (including those based in Japan, thanks to Chrome’s translation abilities).  However, I was not able to narrow down factory information.  I tried going to Nintendo’s website to see if I could gain some more insight, and found that all of their production is outsourced to other companies, creating a layer between Nintendo and the actual factories.  In fact, it wasn’t clear to me whether or not Nintendo even has a record of all of the factories indirectly working for them, and that information was certainly not available.  Since most of the production companies appeared to be based in Asia, where working conditions are not known for being particularly good, I wasn’t too surprised to find that most of these production companies were not forthcoming with their factory information.  However, because I wasn’t able to find factory information, and none of my components had four digit dates, I was unable to pinpoint the exact time of production for my components, but would estimate them as 2013 products.

Overall, my particular contribution to the research was very location based, and it was interesting to see the wide range of contributions that led to the creation of the 2DS, with input from areas as far flung as Britain and Japan.  It also indicated to me that many companies are not very transparent.  Nintendo stated that they conduct tours of facilities to examine conditions, but does not provide factory locations allowing independent entities to confirm these results.  The fact that I was unable to find street addresses for actual production facilities makes me personally question the quality of those facilities.  If the information isn’t public, there is probably a reason that it isn’t…

The full results of our tear-down can be seen on our StoryMap.