My most prevalent presence online is probably on Facebook, which is one of the few social media accounts that is directly linked to my name.  I also contribute content to YouTube under the username UvaSEP (I currently have 78 videos uploaded and almost 80,000 views).  My UvaSEP profile is also connected to a Xena fan forum where I contribute some memes (new as of this semester).  Most of my interactions involve uploads and posts (rarely do I comment on items).

Conducting a Google search of my name yields a YouTube presentation covering my senior culminating project from last year, followed by a scholarship profile and another link to my culminating project (uploaded by Jim Groom).  Also on the first page of search results is my History of Genocide subdomain and main domain.  The presence of my main domain is new (as I had not developed it at the beginning of the semester).  A google image search presents two pictures of me from the World Boardgaming Championships, and an image from my Great Minds article.  Interestingly, a search on Bing yields my domain and subdomain as the first results, while an image search brings up one picture from WBC.

The most noticeable change over this semester is probably the development of my main domain.  Being able to shape this platform to convey the polished image I want to present digitally is important, and furthermore, appears to be working.  It is most telling that a search of my name on bing immediately brings up my main domain.  Essentially over the course of the semester, I have been better able to shape my presence online.  Rather than the top search results being information other people have written about me, some of the top results are platforms that I have created and have direct control over.  Hopefully this will continue to evolve as my professional career develops, allowing me to adjust my presence as necessary (uploading resumes, etc.).  Learning more about my ability to directly shape this digital identity has been the most valuable lesson I have taken from this semester.

The fandom was especially revolutionary in the area of fanfiction, helping to establish terms such as femslash, and genres such as uber and altfic.

Though be careful.  Stumbling upon fanfiction you’re not prepared for…

While Xena/Gabrielle was the most popular ship, others existed.  The community’s general response to Xena/Ares shippers…

After all, the community is very protective of their ship

And intense shipping wars can ensue.

15 years after the show ended, development plans for a reboot were announced.  Xena/Gabrielle shippers upon finding out that the new show will fully acknowledge the relationship. 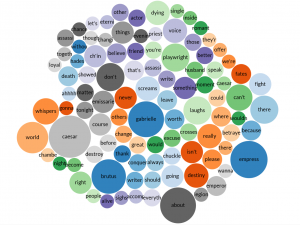 This particular module was very product-oriented, and as such my primary goal was to create some form of mashup.  I was able to successfully combine House of Cards with Donald Trump’s campaign (which can be found here).  My goal was essentially to parody the rise of Trump while also comparing him to a fictional individual who perhaps shouldn’t be in power.  The video was immediately flagged for copyright.  While still available, it was blocked in one country and on some platforms.  This is largely consistent with my previous experience with YouTube.  Usually some aspect of my videos will be flagged (often for music content).  The end result is that the company in question usually has the right to place ads on my video, and occasionally blocks my video in certain areas (such as Germany, which apparently has very strict copyright laws).

I researched some of the mechanics of this process by examining YouTube’s copyright policies (they provide some very detailed pages explaining this).  The “Content ID” alerts that I often receive are issued to YouTube by the company that owns the copyrighted material.  YouTube gives great freedom to the copyright holder, who gets to decide whether or not the material can be used by others.  Generally a nice win-win situation occurs, where the copyright holder opts to let the video remain live, but takes in some revenue from ads.  The copyright holder thus gets  financial compensation, and my creative product remains public.  But what particularly interested me was the process of disputing a claim.  If a claim is disputed without a “valid reason” the content owner can take down your video, and you receive a copyright strike against your account.  This seems like harsh retaliation, and an easy way to dissuade people from appealing a Content ID label that may be questionable.  Overall, I think YouTube tries to keep a good balance between encouraging creativity and honoring the rights of copyright holders.  But the harshness of disputing a claim concerns me, and seems unreasonably weighted in favor of the copyright holder.